Tutorial 3 uses the steady-state (pre-mining) model generated in Tutorial 1 and describes how to construct a transient model for an underground mine that uses the sublevel caving method. This tutorial describes the procedure for creating an enhanced permeability zone for displaced rocks caused by sublevel caving. This enhanced permeability zone is referred to as the “zone of relaxation for caving” in this tutorial. Incorporating this permeable zone into the model will be discussed below.

The results from the steady-state simulation in Tutorial 1 are used as the initial conditions for the transient simulation.

The model created in Tutorial 1 is used for this problem. To open the project file created in the first tutorial, click “File” on the Main Menu banner, then select “Open Project.” The “Load a MINEDW Project File” dialog box appears, as shown in Figure 3.1. 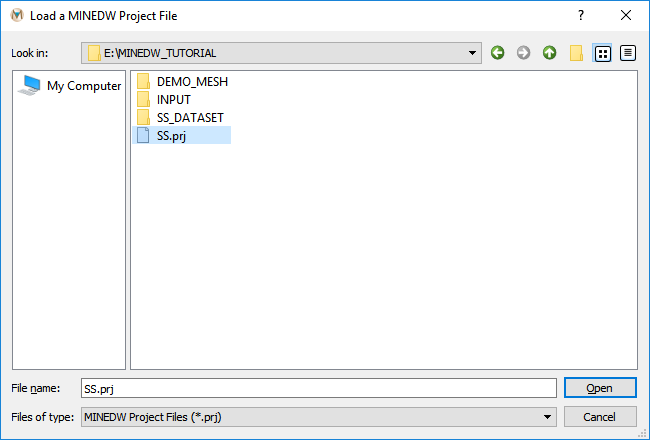 Select the project (.PRJ) file and click “Open.” Next, select “File” from the Main Menu banner and then select “Save Project As” to save the project as a different .PRJ file for the transient underground simulation (e.g., UG.PRJ). 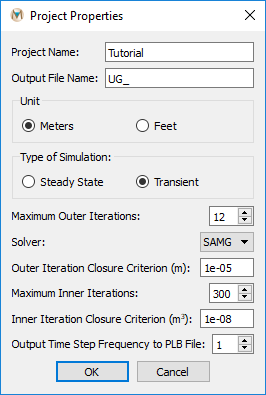 To define initial heads, click “Project” on the Main Menu banner, then select “Initial Heads.” The “Set Up Initial Head” dialog box appears. Choose the “Varied” option and select the water levels file (“*.MDL”) created during Tutorial 1 by clicking on the “…” button as shown in Figure 3.3, then click “OK.”

In MINEDW, the enhanced permeability of displaced rock as a result of sublevel caving can be simulated. The two zones can be represented with different K values for the displaced rock. 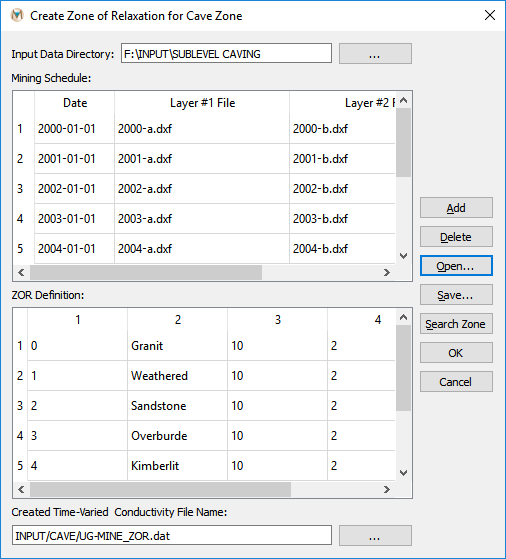 First, enter or select the input data directory where the files you will be working with are located. This can be done by entering the path directly into the box next to “Input Data Directory” or by clicking the “…” button and navigating to the location of the files. Next, enter the dates of the mining schedule and the related .DXF file names in the “Date,” “Layer #1 File,” and “Layer #2 File” columns manually or use an underground-mining schedule file (Appendix B) to load data for Years 0 to 9. To use an underground-mining schedule file to load dates and file names, click on the “Open” button and select the “UG.DAT” file found in the “INPUT” folder. When the “UG.DAT” file is selected, the dates and file names will be listed as shown in Figure 3.3. In this example, “2000_A.DXF” represents a zone with the most displaced rock and “2000_B.DXF” represents a second zone with less displaced rock for the first year of mining. The other .DXF files are for subsequent years of mining.

Click “Search Zone,” and the geological units that are within the displaced volume will appear. Leaving the value under the field labeled “Layer #…” equal to 1 will exclude that geologic unit from the ZOR. For this simulation, use values of 25 and 10 for “Layer #1” and “Layer #2,” respectively. Select the folder where you wish to create the zone of relaxation for caving file by clicking the “…” button and navigating to the location. Next, enter the file name in the box at the bottom of the dialog box and then click “OK.”

Step 5. Adding the ZOR for Caving to the Model¶

To include the block caving ZOR in the model, select “Underground Mining and Dewatering” under the “Mining” drop-down menu on the Main Menu banner. The “Dewatering and Underground Mining” dialog box appears (Figure 3.5). Click “Add” and then select the “ZOR” tab. On the “ZOR” tab, click on “Assign” and, using the “Open Time Varied Conductivity File” dialog box, browse to the location where the ZOR file is located, select it, and click “Open.” After choosing the ZOR file, make sure that the “Activate” box on the “ZOR” tab is checked, then click “OK.” Multiple cave ZORs can be added to the model using this dialog box. 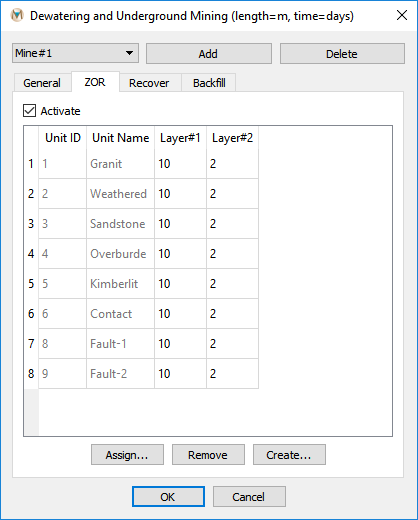 Step 6. Adding the Drain Nodes for the Cave Zone¶

The drain groups have been created in the model, but currently no drains are assigned to the model domain. To correctly assign the drains to the model to simulate the dewatering of the underground workings, begin by adding the file named “Mine_Workings.DXF” in the “Input/Cave” directory to the View Pane. Using the “Layer” attribute, turn on only the “2000” layer. Next, add a “3D Contour” plot item to the View Pane. Toggle through the “Layers,” starting from layer 1, until the top of the “Mine_Workings.DXF” file becomes visible. Using the “Select” tool on the Main Menu banner, select the nodes around this portion of the “Mine_Workings.DXF” file. Once the nodes are selected, press [Enter] to open the “Assign Properties for Nodes” dialog box. Check the radio button next to “Add to Constant-Head Boundary” and then select the “2000” group from the constant-head group drop-down box, then click “OK.” Repeat these steps for all of the layers in the “Mine_Workings.DXF” file. The results should look similar to those displayed in Figure 3.6. 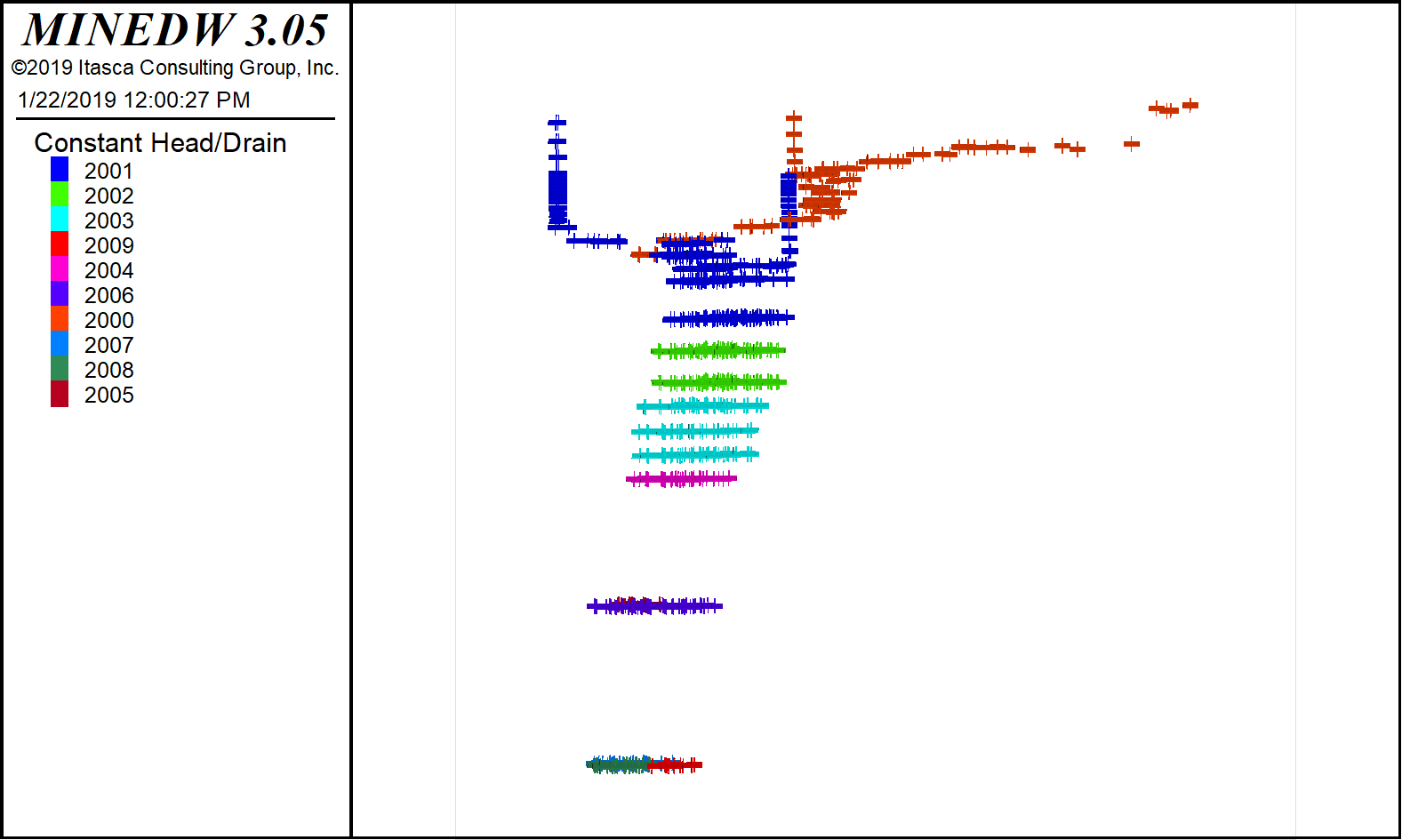 Figure 3.6 The drain nodes used to simulate the underground workings¶

Adding the created drain nodes to the mining simulation will instruct MINEDW to summarize flow to these drain nodes in a special file ending in “*.MNE.” The summarized flow data in the “*.MNE” file could be calculated from the data reported in the “*.FLW” file, but adding the drain nodes to the mining simulation simplifies these steps. To add the drain nodes that are dewatering the underground workings to the mining simulation, open the “Dewatering and Underground Mining” dialog box by clicking “Mining” then selecting “Underground Mining and Dewatering” on the Main Menu banner. Under the “General” tab in the “Dewatering and Underground Mining” dialog box there is a drop-down box next to the window titled “Drain Group Used.” The drop-down box should contain the constant-head and drain groups that were previously added to the model using the “Constant-Head Boundary” dialog box. Select the “2000” group, then below the drop-down box, click “Add.” The drain group name should now be visible in the “Drain Group Used” window and should not appear in the drop-down box. Repeat these steps for drain groups “2001” through “2009.” The completed “Dewatering and Underground Mining” dialog box should appear similar to what is shown in Figure 3.7. Now the model is ready to run. Refer to the following section for running the underground mining simulation. 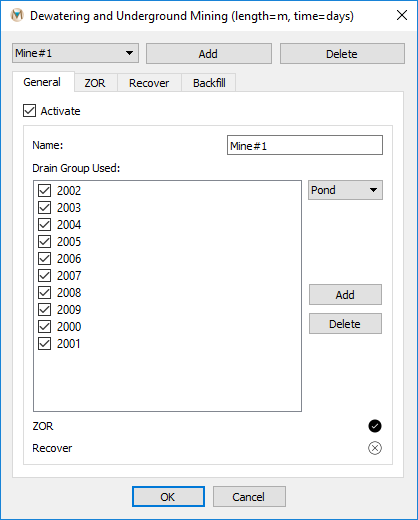 Once the simulation has ended, click “Results” on the Main Menu banner, and then choose “Read Results.” Select the “*.PLB” file from the folder where MINEDW was executed to import the simulation results into MINEDW for visualization. Next, add a “3D Contour” plot item to the View Pane and use the time-step slider to view the desired time step. Figure 3.8 displays a cross section of head at the end of mining just before dewatering operations end. 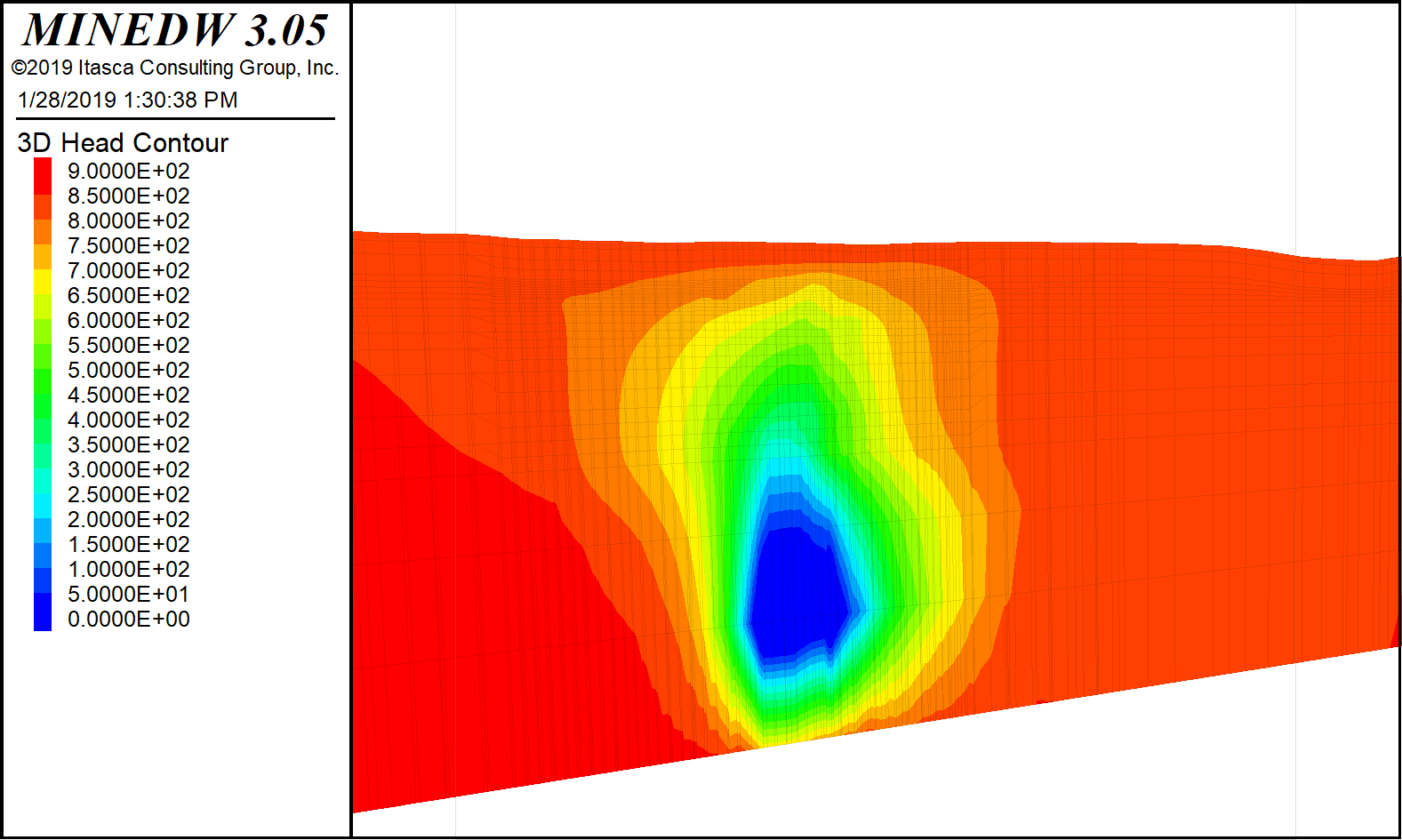 Figure 3.9 Total inflow to the underground workings through time¶

For additional outputs that can be generated from a model simulation, please refer to section 2.3. All of the outputs, with the exception of the “Pit Node Elevation and Water Table,” “Seepage Component to Pit,” and “Pit Lake Water Level vs. Time,” can be generated for the underground mining simulation. This tutorial did not use pumping wells for dewatering the underground mine; however, if pumping wells had been used, the discharge over time could also be plotted. Discharge from pumping wells is recorded in the file with the extension “*.FLW.”